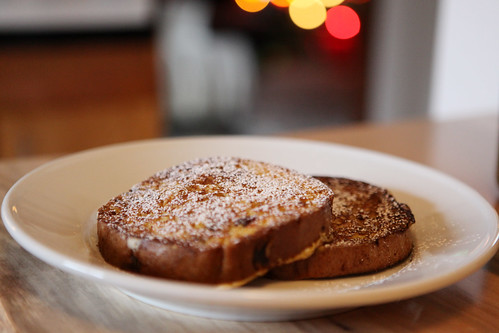 Several years ago one Christmas my Dad suggested makingÂ French toast with panettone, Italian for bread with stuff in it. While we had never thought to try that it made perfect sense. The panettone is light and fluffy like challah andÂ a bit similar to raisin bread with stuff inside making it the perfect combination of the two types of bread I most commonly use to make french toast.Â Since then each year we make sure to get a loaf of panettone and make French toast. My French toast recipe is probably the combination of several other recipes online but it works pretty well.

Slice the panettone in thick slices, about 1/2-inch thick or more. Mix the eggs, milk, cinnamon, and extract together in a wide bowl. Heat up a skillet, pan, or griddle over medium heat. To check the heat toss some water on it, when it dances and sizzles in the pan it is ready. Melt some of the butter in the griddle (I do this each time before I add a new slice of toast). Dip a slice of panettone in the batter make sure to coat both sides. Place on griddle to cook. Cook each side until golden brown. Plate and dust with powdered sugar. 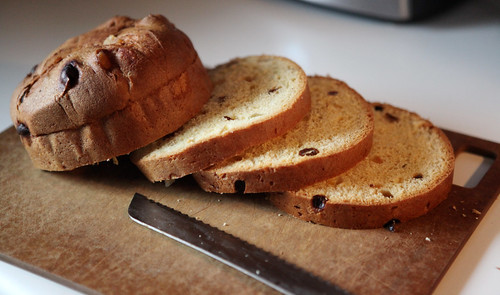