We decided to make some soup to warm us up fromÂ the cold weather that finally arrived. So IÂ madeÂ  a spin on a classic, spaghetti-os.Â It is a simple roasted tomato & red pepper soup with circle shaped pasta, anelli, added to it. 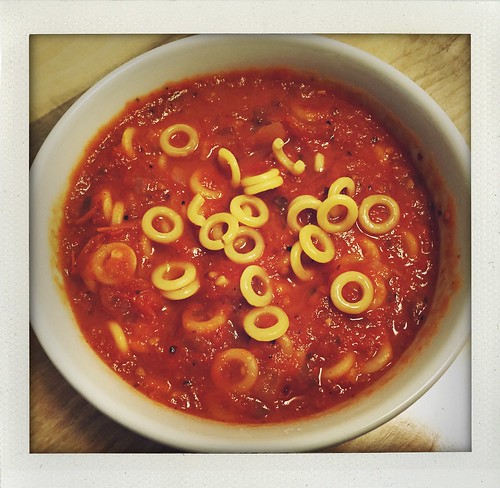 Roast the tomatoes and red peppers, lightly coated withÂ olive oil, in an oven at 350Â° for about 35-45 minutes or until they start to blacken here and there. Set aside to cool. Once cooled enough to the touch core the tomatoes and cut the stems and deseed the red peppers. Cut the red peppers into strips (if your blender is powerful enough no need to do this). Put the tomatoes and red peppers in a blender and puree. Add some olive oil toÂ a large soup pot over medium heat. Sweat the onions and garlic, about five minutes. Add the red wine and bring to a boil. Cook until the red wine reduces. Once reduced add the tomato and red pepper puree. Add the oregano, pepper, and a few extra splashes of red wine. Simmer forÂ at least 10Â minutes to get the flavors to mix. Salt to your taste preference. You can puree the soup again at this point, or just let the onions and other ingredients add a bit of texture to it. I’m lazy so I just left it as is.

In a separate container cook the pasta according to the directions. Once cooked you can add it directly to the soup. The pasta will soak up some moisture in the soup when stored, so if you can’t eat it all when you make it I recommend coating the pasta in some olive oil with a sprinkle of sea salt, storing it separately, and just add the pastaÂ to the soup before serving. “The greatest invention since the napkin.” 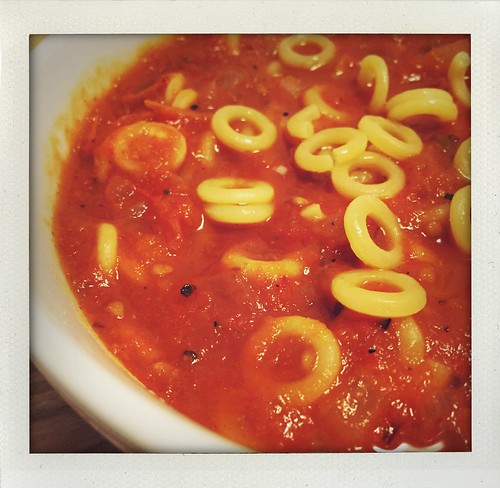